I cant say I am a huge fan of Miguel…however I did buy tickets to see him when he was in London recently because he has an amazing voice and even till today I love listening to Adorn.

He was here to promote his new album Wildheart which has a few good tracks including Coffee.

His performace was a little ecentric to say. I honslty thought he was high at one point! He was very entertaining, with his dance moves however he did talk a lot!

The vibe was very rock star kind with his band and guitar playing. There were 3 songs I was looking forward to him singing the most…Adorn/Coffee and How many drinks. He killed these. I wanted him to strip back and slow the moment down so I could really hear his voice but it was way too punk star rock star for me!

I had a lovely evening and I still love Miguel but wouldnt rush back to see him play live again.

So the stars of Bollywood graced us with their presence last night at the 02.

The show kicked off at 7.30pm. The main acts came on 1st which surprised me as with previous shows, they save the best for last.

Abishek and Shah Rukh made special appearances from entrances so fans could get a glimpse of them close up.

The show lasted 3 hours, each star did a medley of their songs, old to new. There were several skits between each actor which was entertaining and funny. Abishek and Shah Rukh interacted with the auidence well, especially Shah Rukh.

There was a lovely surprise from Signature doing their Britain’s Got Talent act.

Overall I had a good time, but I didn’t think it was the best show, not compared to the concerts they used to do in Wembley back in the days, it was also very overpriced. The production was a little poor and seemed a little disorganised at times.

I think there were too many acts, it would have been nicer to have a smaller number of people who were able to do more acts. There were a few joint numbers done between SRK and Deepika which was nice but SRK with Madhuri would have been even nicer!

A lot of self promoting went into the Diwali release of Happy New Year, I basically paid £100 for a show that promoted a movie I have no interest in watching! 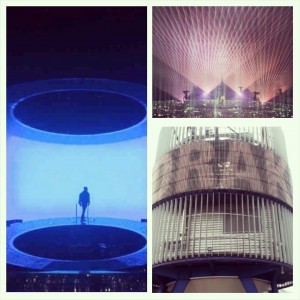 I’ll admit there was a time when I said ‘Drake who’?!

Fast forward a couple of years and his CDs on repeat in my car, I was converted into a Drake fan.

So yesterday I made my second trip this month to the 02 to see him live in concert.

He had a supporting act, ‘The Weeknd’. For a long time I thought ‘The Weeknd’ were a THEY, thank god I realised beforehand it’s a HE!  He came on around 7.30pm, now I only knew one track but he was a good performer and my friend loved him!

‘The Weeknd’ said his goodbyes around 8.15pm and then an hour long wait till Drake come along ( I am guessing the long wait was to set up his pretty impressive stage).

Now if you were expecting him to sing his old stuff the whole night and went for purely that (like the girl who I was sitting next to.  She had no clue what was going on and only got excited when she heard ‘hold on were going home’), then you would have been disappointed.

He started off with Tuscan Leather, his intro on the NWTS album, and most of the night was made up of songs from this album.

He did a few medleys from Thank me later/Take Care and collaborations he had done with DJ Khaleed/Kendrick Lamar.

We also saw special appearances from Jhene Aiko singing From Time and a song of her own.

Drake interacted with the audience well (although a little long), took time out to address as many people as possible and even had a lucky lady join him on stage for a little dance! He was relaxed and was able to sing/rap/ in a timely manner.

Overall I enjoyed the show, I could have easily listened to him for another hour, at just under 2 hours I thought it was a little short.

If you’re a hard core rap/hip hop fan then this is not for you. You would need to be a fan of all his albums to be able to appreciate this show.

If he was in town again I would most probably go see him, the sets, his interaction and the whole party vibe made me appreciate the night.

When Beyoncé announced her tour date in 2013 I was so excited as I had heard if your going to see anyone perform, you must see Beyoncé. So imagine my sadness when I couldn’t get tickets!

I can’t remember the last time I went to the O2, it was like a day trip! Me and my friends left early that day (around 4.30pm) and drove to the O2.  We had left so early as there was no way we wanted to be stuck in any traffic (we found out much later that she wasn’t going to be on stage till 9)!

If you are driving, I would advise pre-booking a parking spot. They charge £21 for this (rip-off) but if you pay there directly, they charge £30 (even bigger rip-off)!

Having reached there so early, we had plenty of time to kill and decided to take a trip on the Emirates cable cart.  This only killed 10 minutes of our time, they charge £6 for a return trip providing you an Oyster card (£8 otherwise). The views of the O2 were lovely.

We ate at Jimmy’s (Jimmy’s World Grill & Bar – jimmysworldgrill.co.uk‎), for the simple fact that there were 6 of us and a buffet was the easiest choice. They charge £16.99 for all you can eat, a variety of Indian, Chinese and Italian. This was actually one of the nicest buffets I have been too, the variety was decent and fresh food can be made on the spot. You pay before you eat so when your done there is no time wasting on waiting for the bill!

My friends who are Sky customers signed up for tickets so we could have a drink at the Sky backstage lounge before the show. This was nice as we were able to avoid the lines entering the block. We chilled back stage before entering the arena at 8.30pm.

The show lasted approx. 2 hours and I have to say they were the best 2 hours. She is simply flawless, an all round entertainer. We even had a sneaky cameo from Jay-Z! She covered most of her hits from previous albums and a few from her latest.

Anyone wanting to watch a show at the O2, I would recommend spending a bit more and trying to get seats in block one, our views were brilliant!