Other things I have done 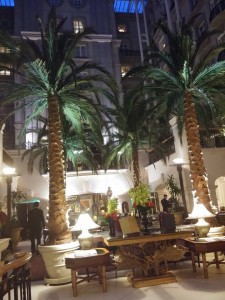 Last week I met with my friends for a post new year catch up a the Landmark Hotel for afternoon tea.

The interior of this hotel is stunning. Palm trees in the centre of the tea room, with a guy playing piano on the middle floor, tall ceilings with sky limits, simply a lovely setting.

We opted for the chocolate afternoon tea with champagne to start us of with.

Sandwiches then came, you have veg or non veg options, and then someone comes round with more sandwiches, you can have as many as you want!

Then came the tea and scones. There is quite a variety of tea. I tried the mango and caramel both nice but sweet so ended up with a couple of breakfast teas towards the end.

We then got the chocolate platter of cakes with various different treats, which unfortunately we couldn’t finish! You can take them home if you want!

Overall we had a lovely afternoon, the staff were polite and courteous, the food delicious and it was just a very relaxed afternoon, there was no one ushering us to leave, we were able to sit and catch up at our leisure.

There is a January deal for the classic package for £30 otherwise they range from £45 upwards.

This is the 2nd time I have been to Thorpe Park this year, the 1st time for Fright Night.

So for those of you who don’t know, in the last month of October, Thorpe park leaves it gates open until 10 pm for Fright Night where mazes are created and rides can be experienced in the dark and lots of activities for Halloween basically.

Tickets are crazy expensive almost £50 so if have a 241 voucher, use it! I got to the park at 10.30 am and left at 10.30 pm. Do you need so many hours? Yes you do! The amount of people that go for Fright Night is unbelievable. The waiting time for most of the good rides were almost 2.5 hours long! So even though i was there a long time,  I didn’t get to do every single ride!

The mazes don’t open till 3 pm which is a shame because of the amount of people there, the more time they were open would have been better. I would advise to get fast track tickets for the mazes (£5 per maze). These were sold out when we went so we only got to experience one maze (Cabin In The Woods) which was pretty scary and worth the wait.

Over all I had a good time but it didn’t feel like anything overly special was done for Halloween. Nemesis in the dark was pretty cool and the one maze I experienced was fun. If you do go, fast track it all the way!

This has been one of the hardest things I have had to organise.

Trying to find a free Sunday where all 6 of me and cousins were available was hard!

After what seemed like months of planning, last week I went along to the Harry Potter Tour.

Our slot had been booked in for 3.30. It’s crazy how quickly these things get booked up, we literally booked weeks in advanced.

There was already a queue forming for this slot, we had to line up for around 10 minutes.

We were taken into a room where we were explained a little bit about the tour and then shown a short video.

We had a guide in the great hall but after that we were allowed to wonder off on our own.

The sets were amazing, it was great seeing everything in every single movie.

You get to do some virtual things like pretend to drive the flying car and ride the broomstick, both were fun.

There is an outside section too, which had sets such as Harry’s house and Hogwarts bridge. Diagon Alley was pretty impressive too!

We were at the tour for around 4 hours, you can do in less but there is loads to see. Apparently someone stayed in there for 13 hours!!

There is a lovely gift shop at the end, but crazy expensive.

Tickets are non refundable, you can change the date/time slot but they charge you £10 for this.

We had an amazing day, if you are a Harry Potter fan, then you will love this. 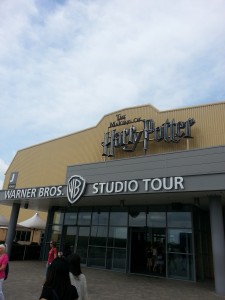 I bought tickets for Wireless in February and I was excited for 3 reasons:

2 – I was going with a good friend of mine 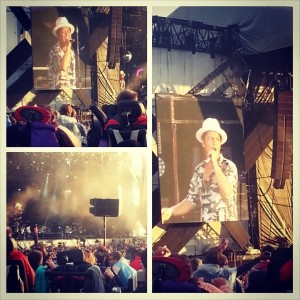 So come the weekend of wireless what happens? I had only gone and fractured my ankle!

There I was thinking I would have to pass up on my tickets when the doctor fits me in with a foot brace and crutches and says away you go!

Unfortunately I couldn’t spend the whole day there but I got there around 4.30pm.

I was able to walk through the disabled entrance (much quieter).

It was packed of course and it was nice to see that I wasn’t the only one sporting crutches.

Me and friend went to the Pepsi max stage to see Sean Paul and managed to sit in the disabled section, there was no way that I would have been able to stand, it was crazy!

Sean Paul was cool, sang most of his old stuff, if I was still 18 I would have probably enjoyed it more.

We next went to see Outkast and again I managed to sit in the disabled section. They were brilliant, sang all the favs like so fresh. Only shame was that it started pouring down, but the very nice guys in the section gave us plastic rain coats.

Final act was Bruno Mars, again disable section which I was so grateful for. He was amazing! The band were great and fireworks at the end were pretty good too.

The show ended around 10pm, it was chaotic leaving, but everyone was being so nice letting me pass through.

Overall I had a great time, I would defo go again next year, hopefully with a better foot as I would have loved to have been in the crowd and take part in a true ‘festival experience’.